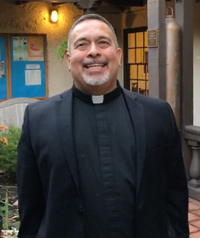 The Rev. Ricardo Avila received his BA in English Literature from the University of Wisconsin, Madison, and his M.Div. from the Church Divinity School of the Pacific. He was called as Rector to St. Luke’s in Los Gatos in 2018.

Ricardo finds joy in building community with a sense of humor. He aims to uncover divinity in the mundane and escort the secular to the altar of faith. Mostly, he frets and tries to be good. 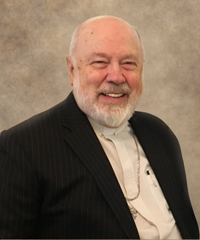 Ernest was raised in Oklahoma, and received his M. Div from the Divinity School of Harvard University, where he found a connection between reality and religion through professors who were leading biblical archaeologists. After a year of Anglican Studies at The Episcopal Divinity School in Cambridge, MA, Ernest was ordained priest at Church of the Redeemer in Chestnut Hill, MA.  In 1967 he became rector of St Gabriel’s Church in Marion, Massachusetts, where he served for 25 years.  In the summer of 1969 he was vicar of Barkway, Buckland and Reed in Hertfordshire, England.  During the summers of 1976-1981 he was Director of Camp Mishawaka for Boys in Grand Rapids, Minnesota, where he’d been a counselor since 1957.  In the Diocese of Massachusetts he served on the Commission on Peace & Justice, chaired the Commission on Music & Liturgy, planned and MC’d the consecration of Bishop David Johnson, and orchestrated the Eucharist for 8,000 people at the consecration of the world’s first woman bishop, the Right Reverend Barbara Harris.

He took a sabbatical in 1988, which included 3 months at St George’s College in Jerusalem, along with tours of Egypt, the Greek Isles, Europe, and Northern Ireland.  In 1990 the bishop and Peace & Justice Commission sent Ernest back to Israel/Palestine to develop a program to understand the situation there, resulting in SAMA’ (Arabic for “listening”), which became a program for the national church, hearing the voices of Palestinian and Israeli peacemakers.

In 1992 Ernest accepted a call to become the rector of St Andrew’s Church & School in Saratoga, CA.  He chaired the Standing Committee of the Diocese of El Camino Real during a troubled time, and was elected a deputy to four General Conventions of The Episcopal Church, serving on the Committee on National & International Affairs. St Andrew’s made a significant gift benefiting the Ali Hospital in Gaza, the Four Homes of Mercy in Bethany, and Saint Luke’s Hospital in Nablus, and established clinics in Haiti, Bosnia, and Ruwanda, Africa.  The remaining funds of that gift established a new version of SAMA: Saint Andrew’s Medical Assistance project, which sent Americans to work in Bethany and Gaza.  Since 1990 he and his wife Jill have led numerous pilgrimages to Israel, Palestine and Jordan, taking people to refugee camps and hospitals, as well as holy sites.

Since his retirement from Saint Andrew’s in 2007, Ernest has continued his work on behalf of peace and justice in the U.S. and the Middle East, is president of Canterbury Foundation, and serves as an associate priest at St Luke’s Church in Los Gatos, continuing his vocation as a preacher, writer, composer and counselor.

In 1963 he married his wife, Jill, and is the father of a daughter and son, and grandfather of three. 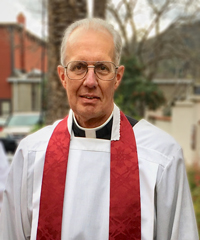 Fr. Emerson studied for the ministry at the Church Divinity School of the Pacific in Berkeley, CA.  Upon graduation, he was ordained as Deacon and as Priest by The Rt. Rev. G. Richard Millard, Bishop Suffragan of California.  He served as the Curate at St. Francis Episcopal Church, Palos Verdes Estates, CA.  After his Curacy, he joined the staff of St. John’s Episcopal Church on Adams Boulevard, Los Angeles.
After moving back to the West Valley, he joined the staff at St. Luke’s. He has very much enjoyed his many years on staff at St. Luke’s, particularly enjoying its people, and the Anglo-Catholic worship. 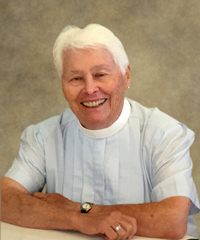 Nayan serves as a Clergy Associate at St. Luke’s and occasionally as a supply priest at other parishes and missions in the Diocese of El Camino Real. She is also Chaplain to the clients of St. Luke’s Outreach Program. She is a retired Dean of the Language Arts Division and professor of literature and linguistics at Foothill College in Los Altos Hills. She holds a B.A. and M.A. in English and a PhD in Educational Philosophy, all from the University of California, Berkeley.  She was baptized and confirmed at St. Mark’s, Berkeley, while an undergraduate. She taught for over 30 years before “reading for orders” under the direction of Bishop Richard Schimpfky and the guidance of a committee of diocesan clergy. Nayan was ordained priest in 2002. She joined St. Luke’s in 196l, and as a lay member has served the parish as acolyte, diocesan delegate, vestry member, search committee chair, and senior warden. Since ordination, she serves as one of the assisting clergy. Her diocesan contributions include: diocesan council, standing committee, member and chair of the commission on ministry, and as Vocations Secretary. She has served as deputy (twice) and alternate deputy (twice) to the Episcopal Church’s General convention. She is married to Jo Greiner, head of St. Luke’s pantry program. They live in Los Gatos. 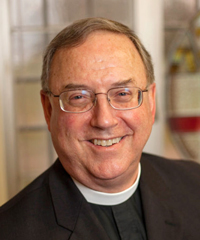 A San Francisco native, Bill Stafford was a professor of church history at Virginia Theological Seminary from 1976–2004, and also served as associate dean for academic affairs there from 1997–2004. He was dean of the School of Theology at University of the South (Sewanee) from 2004–2012. He now serves as visiting professor of church history at Church Divinity School of the Pacific.

Michael, our Parish Administrator, runs the office here at St. Luke’s. He has worked as a writer, editor, and graphic designer, and once published a novel with St. Martin’s Press. For years, he also taught English country dancing, and performed at the Northern California Renaissance Faire, and the Great Dickens Christmas Fair in San Francisco. 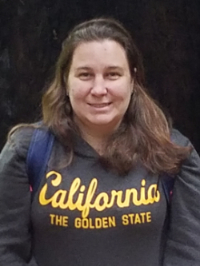 Cassie was born and raised in Florida, and her husband is a San Jose native. After spending 11 years together in Florida, they moved to California in July 2016.  Cassie is a Disney fan, and loves watching soccer and baseball. She’s mostly behind the scenes helping Art, but reaches out to various parishioners from time to time as part of the St Luke’s team. 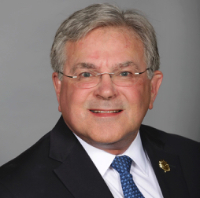 Arthur Feather has been the Treasurer for St. Luke’s since 2013. He previously served as Senior Warden for six years, and also was on the Vestry for several years. He earned a Master of Business Administration from Colorado Technical University, and earned both a Masters and Bachelors degree in Electrical Engineering from the University of Kentucky. He is presently an Investment Advisor Representative for Transamerica Financial Advisors.